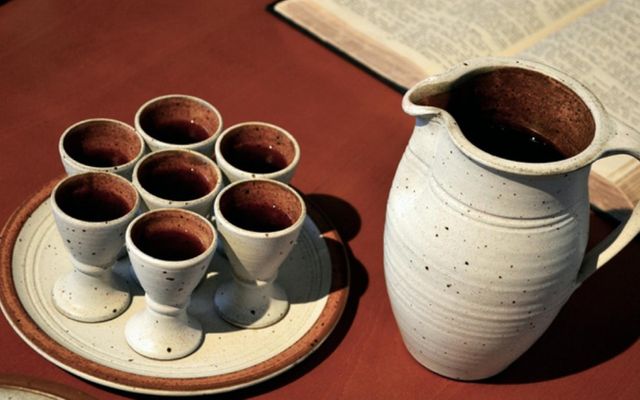 And when they had come to a place called Golgotha, that is to say, Place of a Skull, they gave Him sour wine mingled with gall to drink. But when He had tasted it, He would not drink. (Matthew 27:33-34)

Now a vessel full of sour wine was sitting there, and they filled a sponge with sour wine, put it on a hyssop, and put it to His mouth. So when Jesus had received the sour wine, He said, “It is finished!” And bowing His head, He gave up His spirit. (John 19:29-30)

You can clearly see from the above scriptures that Lord Jesus Christ was ‘twice’ offered wine while on the cross. He refused the first but took the second. Why so?

When Jesus was offered wine the first time, it was mixed with gall (and myrrh - Mark 15:23) which he did not take.

According to an old tradition, respected women of Jerusalem provided a narcotic drink to those condemned to death in order to decrease their sensitivity to the excruciating pain. When Lord Jesus arrived at Golgotha, he was offered wine mixed with myrrh (gall), but he refused it.

This first wine represented an offer to ease the pain to some extent. Lord Jesus refused this and chose “to endure with full consciousness the sufferings appointed for him.”

The offering of this first wine mixed with narcotics was a fulfilment of a prophecy given by King David. While in the depths of a painful trial, David cried that his enemies gave him only something bitter to quench his thirst (Psalm 69:16 - 21)

Bible scholars also mention that a dash of sour wine vinegar is mentioned in the Old Testament as a refreshing drink (Numbers 6:13; Ruth 2:14). In Greek and Roman literature as well, it is a common beverage appreciated by labourers and soldiers because it relieved thirst more effectively than water and was inexpensive.

The second time wine was offered to Jesus was with the intention to keep Jesus conscious for as long as possible.

Other condemned criminals would have taken the first (to ease their torment) and passed on the second (so as not to prolong their horrific pain). But Jesus did not take any shortcuts to secure our redemption.

At the cross, Lord Jesus drank the wine of his Father’s wrath that we might enjoy the wine of His Father’s love, join him at the Marriage Supper of the Lamb, and live redeemed forever in the glorious presence of the one who took no shortcuts in saving us.
Prayer
Lord Jesus, thank you for the pain and the suffering you endured for me on the cross. You perfectly understand all that I am currently going through. Strengthen my family members and me, I pray. In Jesus’ name. Amen.