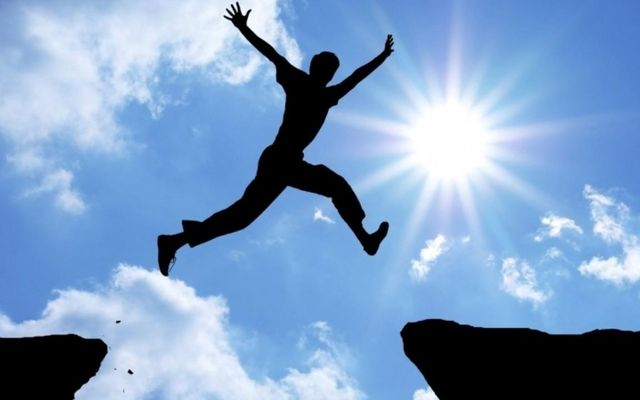 "Those who do wickedly against the covenant he shall corrupt with flattery; but the people who know their God shall be strong and carry out great exploits." (Daniel 11:32)

Sometimes life can be intimidating. The Bible relates the devil to a lion seeking someone to devour. He is not a lion, but he knows he can't scare people out of their purpose and assignment if he doesn't pretend to be one. So he comes to roar, and then people of purpose run away from their glorious purpose into mediocrity.

But it takes courage to walk into your God-given purpose. The Bible says in Esther 5:1-2, "On the third day, Esther put on her royal robes and stood in the inner court of the palace, in front of the king's hall. The king was sitting on his royal throne in the hall, facing the entrance. When he saw Queen Esther standing in the court, he was pleased with her and held out to her the gold sceptre that was in his hand. So Esther approached and touched the tip of the sceptre."

Esther showed courage in her willingness to appear before the king without being summoned by him. This took special courage because King Ahasuerus did not have a good reputation for treating his queens well. She took her life in her hand and forgot anything else. Earlier she said in Esther 4:16, "Go, gather all the Jews who are present in Shushan, and fast for me; neither eat nor drink for three days, night or day. My maids and I will fast likewise. And so I will go to the king, which is against the law; and if I perish, I perish!"

She wasn't going to look back even though her life was at stake. Yes, it was against the law of the land to appear before the king uninvited. But when would the king send for her? Yet, the decree to execute the people had been signed, and the time was ticking fast.

It takes courage to get what you want from life. Many people would have been great today if only they had the courage to start the business when God told them. Their minds were filled with different excuses. "What if I fail?" "What if no one supports me?" "How would I even start?" "I don't have the experience." The devil filled their minds with doubts and uncertainty, and the purpose was aborted.

Do you think people in the palace didn't try to talk Esther out of that suicidal move? I'm sure her maidens would have asked her many times, "My Lady, are you sure you really want to do this?" "What if you are the first to die? Of what use if your death?" "Why not wait a little longer?" "Okay, instead of going, perhaps you should send a letter to the king." "Why not pretend to be sick, maybe the king would come." Yet, Esther took the bull by the horn and with faith in her God, she went in person and stood before the king.

What was the outcome of that courageous move? The Bible says, "Then the king asked, "What is it, Queen Esther? What is your request? Even up to half the kingdom, it will be given you." Esther 5:3. Instead of being killed, she caught the king's attention. Even without opening her mouth, the king began to swear half of his possessions to her as though he was already waiting for her.

Hello friend, be courageous. Make the move today. Make the call. Send the application. Start that business and see God take over from you.

Note also that it was on the 'third day' that Esther went before the king. All on the third day! Jesus, having gone down into the place of death, was also granted life and favour on the third day, leading to the greatest event in the history of mankind - the resurrection!

Having found favour with the king, with the golden sceptre extended to her, Esther is now given a blank cheque by the king to ask for anything that she likes! Wow! What would you ask for?
Prayer
Father, in the name of Jesus, I pray that you give me the spirit of boldness. I pray that you fill my heart with courage. Take away fear and doubt from me, and help me to move by faith in you. I decree that nothing shall stop me anymore. In Jesus' name. Amen.

● The Best God Given Resource
● Lessons From the Life of Judas- 3
● 21 Days Fast: Day #1
● It is Turning Around For You
● He is Watching
● Stopping the Serpents
● What is Good Success?