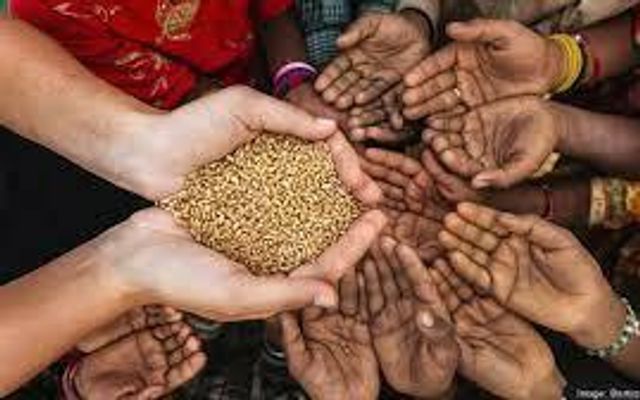 There was a woman in Zarephath. Her husband had died, and now she and her son were starving to death. They were victims of a widespread famine. There was no place to go and nothing to do about their plight. It was in such a situation that God sent His prophet, Elijah, to them.

As the woman was going to get some water, Elijah called to her and said. “Please bring me a piece of bread, too.” There was probably a worried look on her face because her food was running out as a result of the long famine.

“I don’t have any bread—only a handful of flour in a jar and a little oil in a jug. I am gathering a few sticks to take home and make a meal for myself and my son, that we may eat it—and die.” said the widow.

The last meal was not enough for the widow and her son, but she gave from the little she had, and that launched her into the realm of increase and surplus. When God wants to bless you, He will ask you to release what you have in order to prove your obedience and test your level of love for Him. If the woman had failed in giving, she would have robbed herself of the increase.

The kingdom of God operates with laws that are different from natural laws governing the physical world. We are kingdom citizens, and we must align ourselves to kingdom practices. For instance, the worldly system believes that “seeing is believing,” but according to the kingdom lifestyle and law, “believing is seeing.”

There are many ways that one can go about enjoying an increase, but one sure way that you must not ignore is “giving.” The world believes in “receiving” as a form of blessing but according to the kingdom, “giving” is a blessing.

One more thing that you should bear in mind is this, God commanded us to give (Luke 6:38), and anytime we give, we are obeying His commands, and there are blessings that spiritually and naturally flow to those that live in obedience. Let us look at some of the blessings attached to obedience.

Now, please understand while many have limited giving only to finances. Giving can be applied to all spheres of the Christian life.

Reasons Why Giving is Crucial
1. Giving Increases Your Harvest
2 Corinthians 9:10 says, “This generous God who supplies abundant seed to the farmer, which becomes bread for our meals, is even more extravagant toward you. First, He supplies every need, plus more. Then he multiplies the seed as you sow it so that the harvest of your generosity will grow.”

Giving always multiplies what you have sown. Be it forgiveness, time, finances, etc. What you will harvest will surely be more than what you sowed. Having this understanding should always encourage you to sow, knowing that it is a covenant practice for increasing whatever we have.

An Appeal
During a season of fasting and prayer, the Holy Spirit spoke to me to buy a studio where we could hold our LIVE services regularly. It would also be like an Oasis where I could minister to the people one-on-one.

Will you be ONE of them?
Remember, the LORD never forgets what you do towards His name and His Blessing will touch you and your generations to come. (Hebrews 6:10)

You can give through the Noah App/Cheque or Bank Transfer
OR you can give cash at the KSM office or meetings
Confession
Father, in the name of Jesus, I confess Your abundant provision in my life today. As I meditate on Your Word to observe all that is written, I will make my way prosperous and have good success. Thank You, Father, that I will suffer no lack in spirit, soul, body, socially, and financially.

● Greater Works
● Blame Shifting
● Do You Easily Get Hurt?
● The Integrity of the Word
● Your Day Defines You
● Prioritize the Altar to Alter Your Life
● Inquire of the Lord